The cream of the crop in this week's Food & Dining Sections

Here's a story about the classic New England Boiled Dinner that graces our tables on St. Patrick's Day, titled "Savoring Irish Legacy." It appeared in the before-its-time food blog, Fillet.com, circa 1997. (At the time, we didn't even know it was a blog.) Fillet.com was a side project founded by my then-colleague, the multitalented Adam Powell. It was featured in HotWired.com's Test Patterns section -- a playground where Wiredlings could launch their own passions or quirky ideas into sitelets.

Make sure to check out the great stories on Fillet.com penned by cyberfoodies of yesteryear.

RECIPES for Irish Soda Bread, Corned Beef and Cabbage within.
Posted by Unknown at 10:06 AM No comments:

This week's Dining section picks according to me!

+ Lowcountry Cuisine: Charleston, South Carolina A great city with a cuisine of its own and a growing restaurant culture.
+ LISTING: Restaurants to visit in Chaleston, SC.
+ RECIPE: Shrimp and Okra Beignets with Salsa and Cilantro-Lime Sour Cream. Scrumptiously southern.
+ RECIPE: Fried Green Tomatoes and Shrimp Rémoulade .

Posted by Unknown at 2:04 PM No comments: 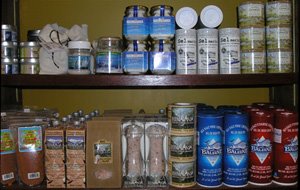 At a recent outing in Eagle Rock, we experienced a unique appetizer at the fine veggie restaurant, Fatty's. The dish was Roasted Name Root with three Artisinal Salts for dipping. Part of me scoffed at ordering a $9 appetizer that's basically salt and a starchy vehicle, but the curious salt lover in me said what the hell.

An artful arrangement of transculent pink, smokey grey and pristine white salt crystals arrived at our table plated in little piles with starchy cubes that could have passed for home fries. A printed piece of paper with a list of the salt varieties came with:

The taste variations were definitely detectable from nutty to floral to smokey, but the dish itself had more of a novelty factor than anything else. It's clear the best uses for these sublime salt options are to finish a simple dish, such as Crudites or Roasted Veggies.

If you are looking to expand your salt collection beyond Morton's and into the realm of color, there are many options at local grocers and specialty food shops. My local epicurean shop carries 12 different varieties of salt including a dark pink Hawaiian Clay Salt and a lighter rose-hued Himalayan. Williams Sonoma offers a collection of six Finishing Salts for $29.

Note: Love salt and you're a history buff? Then you have to pick up Mark Kurlansky's fascinating retelling of world history through the eyes of Salt.

Posted by Unknown at 1:48 PM No comments:

Brewed by the Sea 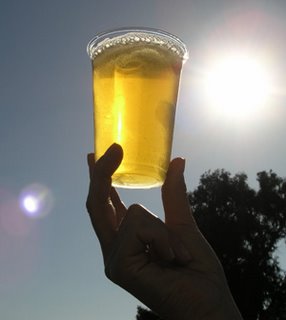 This elixir is the brainchild of the crafty kids at Island Brewing Company microbrewery in Carpinteria, CA – an idyllic little coastal town nestled between the rising slopes of the Santa Ynez Mountains and the rolling Pacific surf. Here is where the lucky arrive to sip some mighty brews in a chill setting.

But wait, did you just put your mushy avocado in my beer?
Not quite.

The honey in the Avocado Honey Blonde Ale recipe comes from bees who got busy in an avocado grove. The essence is in there, even if the taste is not. To me, this equals the exotic.

I sampled the limited release at the grand opening of the Island Brewing Company’s tasting room and new headquarters. Done in the method of a classic Kolsch-style ale with Czech saaz hops, it goes down super smooth and refreshing with faint notes of honey.

This particular variety is a whimsical deviation from Island Brew’s strong stable of award-winners, including: the Island Blonde, the unfiltered Bavarian Island Weiss, the Brit-inspired Nut Brown Ale, Paradise Pale Ale, Island Pale Ale and the formidable Jubilee Ale. Their beers are true standouts -- and an experience. For the time being, these brews can only be experienced locally. So go there! 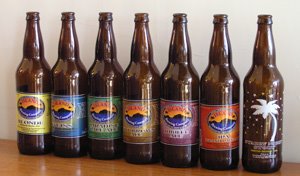 Posted by Unknown at 7:03 PM No comments:

Yiipppeee ... this week's Food & Dining Section is out!
Here's my filter of what you need to know:

New York Times
+ Trader Joe's in Union Square. Now there's really NO excuse for me not to be living back in NYC.
+ Les Dames du Boeuf: Mid-Century maitrons with discerning palettes and a taste for non-trendy nostalgia. What a great club!
+ RECIPE: Duck and Andouille Étoufee (NOT Emeril). One New Orleans chef's variation on a roux.
+ RECIPE: Warm Feta Salad with Ouzo Vinaigrette. Sounds yummy and features my favorite winter root, fennel.
+ VIDEO: Spiced Winter Ribs (cooked indoors). Here's the RECIPE in case you're video challenged. 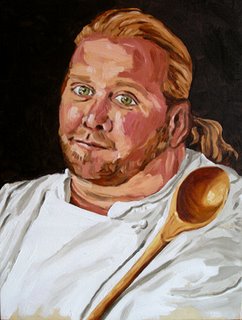 Each culinary endeavor I undertake is performed beneath the benevolent and forgiving gaze of my patron saint Mario. Brett painted the above likeness of chef Mario Batali from the image on a spaghetti sauce jar as a birthday gift. For me it's not unlike a Petrarch/Laura scenario applied to the exercise of my nightly supper.

We love Mario for his passion, knowledge and accessability. Not to mention his magnanamous nature and eloquence. And he's a neighborhood regular who always (or usually) has time for his other neighbors.

One day at the Union Square Greenmarket (Farmer's Market) in NYC's Greenwich Village, I encountered fragrant and bountiful bouquets of Sage and decided THAT ingredient was to be the foundation of my dinner. It was a very special night because Brett and I were going to Radio City Music Hall to see Bjork perform -- a first for both of us. (He's even more reverential of Bjork than I am of Mario, but we all know his worship treads into the most secular of desires.) So it HAD to be seductively scrumptious.

My first thought: a FISH DISH! But I was stumped by the variety and method.

Enter Mario, deftfully snatching up green produce beside me. I turned to him and asked, "Mario! If you could cook any fish dish that includes Sage -- what kind of fish would it be?"

Mario contemplated this for exactly four seconds and rebounded, "Why, Skate Wing of course! It's a classic bistro dish! Just cook the Skate Wing in butter, throw in the Sage leaves, let the butter brown then finish it off with some Capers and a squeeze of Lemon. Perfection."

It sounded delicious to me and I had never tried to cook Skate Wing before -- an even more tantalizing challenge!
I thanked Mario heartily and merrily hopped on my way to Dean & Deluca to complete my mission.

I spotted the Skate Wing straight away in D&Ds fresh fish display. I ordered one pound of the Skate Wing, when the luxury fishmonger delivered the blow:

"Well, the only problem is that this Skate Wing isn't filleted. The guy who fillets the Skate Wing won't be in until tomorrow at 10 AM."

Not satisfied, I couldn't help but insist in rapid fire, "Am I not standing in Dean & Deluca?? Are you not the fish guy?? Why can't you fillet the Skate Wing?... Can I give it a try at home if you tell me how?"

"Umm ... sorry lady, but I've worked here for 3 years and even I can't fillet a Skate Wing. The bones are really small and intricate." (ED note: Liar.)

Deflated does not even approach how I felt. My dreams of Mario's Skate Wing were going up in smoke before my eyes. I was running out of time to get the ingredients and make dinner before we had to head uptown for Bjork, so I knew I had to accept defeat and make due.

I headed to the fresh ravioli section and bought the most obvious accompaniment to a brown butter and sage sauce: Butternut Squash Ravioli. Yes, Mario has a nice recipe for that dish, too, but it's just not the same as a recipe relayed to you in the oral tradition by a master chef.
Bjork won that night.

Melt butter in a large 10 or 12 inch skillet. Add Sage leaves and cook 2 minutes. Add cleaned Skate Wing season with salt and pepper. Saute on medium high heat for 2-3 minutes per side or until opaque. Move Skate Wings to a plate and turn up the heat til the butter is browned. Add caper & squeeze of lemon juice. Cook until sauce is reduced, about 2 minutes. Pour sauce over Skate Wings and serve.
Posted by Unknown at 2:41 PM 1 comment: