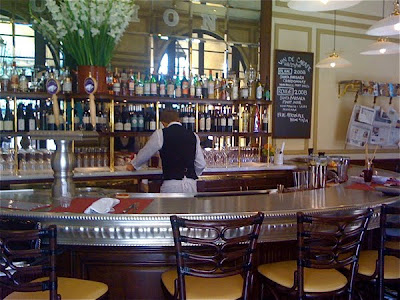 Today, I found myself in Beverly Hills before the lunch rush and decided it was high time to pay a visit to Thomas Keller's recently opened Bouchon Beverly Hills.

Thinking I'd try my luck for a lunch reservation or at the very least scope it out for a later date, I arrived to find an unexpected and even more enticing option for the solo patron: the Bar Bouchon wine bar.

Intimate, no reservations taken, a newly crafted small plates menu, and chic outdoor tables alongside a perfect European-inspired garden -- my heart quickened as I eyed up all the empty spaces.

After a quick tour of the stunning and grand bistro upstairs, I decided to grab a seat at the more casual wine bar for lunch. 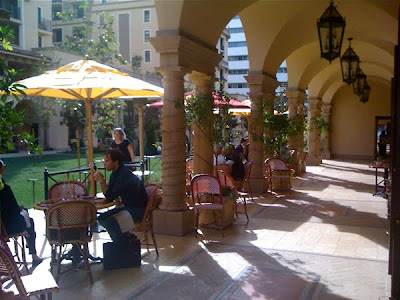 Bar Bouchon is appointed with all the elements that characterize Bouchon Bistro (and the bistros of Lyon, France, for that matter): the pewter bar, classic bistro mirrors, chalkboard menus, gladiolas, vibrant floor tiles, as well as a window into the kitchen à la Bouchon Bakery. 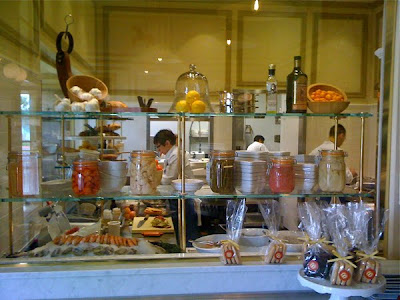 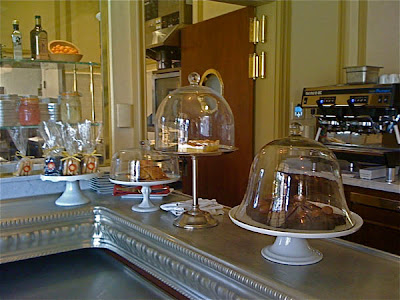 The bar hosts a modest 8 chairs, plus 6 more at a side counter bar and probably 8 tables outside. The delectable creations by the pastry chef sit atop the end of the bar in glass cake plates near the kitchen. An abbreviated raw bar display of succulent pink shrimp and oysters on an ice bed rests below a variety of vegetables perfectly preserved in glass mason jars. 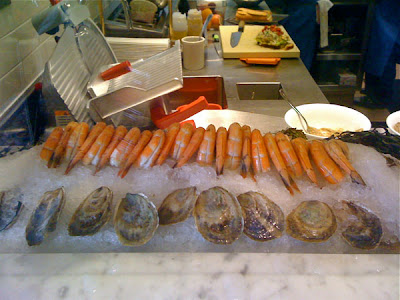 Dizzy with the thrill for this kind of food and its culture, I felt I had found a new home in LA.

Ryan, Bar Bouchon's manager, and Jesse who was manning the bar gave me the lowdown on Thomas Keller's new concept. Bouchon Bar is the more relaxed cousin (no bow-ties), but same high-quality food as Bouchon, and features a tapas-style menu of smaller plates. They've added a "Jardin" section of vegetable appetizers -- fennel, beets, cauliflower, etc -- and include some of Bouchon's greatest hits: olivade, salmon rillettes, macaroni gratin with truffles, tartines, salads, seafood raw bar, cheeses, charcuterie and special Plats du Jour. I opted for two items on the Plats du Jour menu: a chicken curry tartine and a bowl of cauliflower soup. Both were divine. 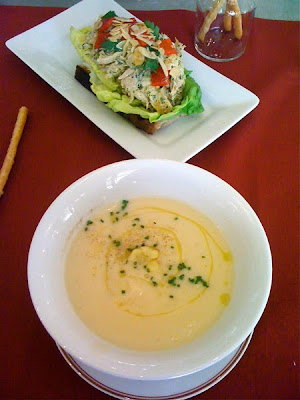 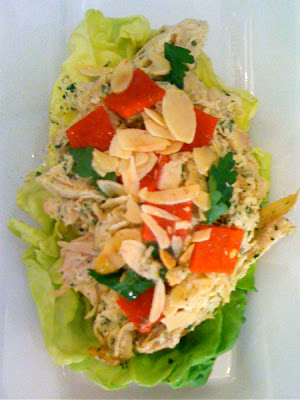 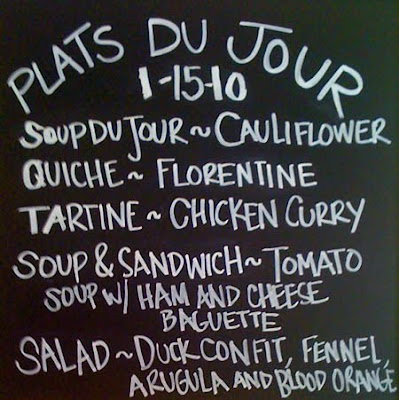 The bar is stocked with artisanal and carefully curated spirits. You won't find Grey Goose, Belvedere or any of the well-known premium brands. Instead their vodka choices are Russian Standard and Charbay from California. Beers on tap include White Apron, made for French Laundry by Russian River Brewing Company and Blue Apron, made for Per Se by Brooklyn Brewery. Bar Bouchon also introduces the Vin de Carafe label -- a partnership between Keller's team and various producers and winemakers in the Napa valley -- at a very nice price point. I had the white Vin de Carafe with lunch, which was a very lively and yummy Chardonnay. 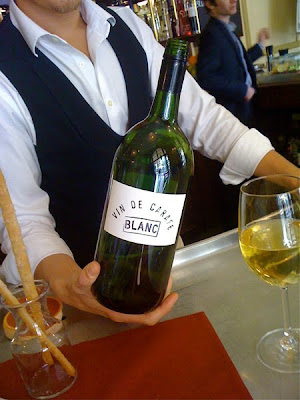 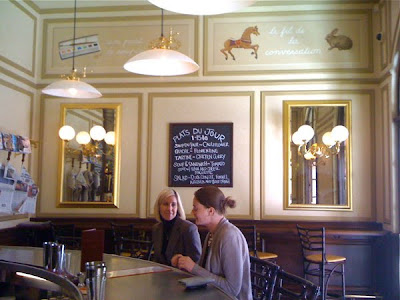 Keller opened Bar Bouchon three weeks ago and is testing the concept here in Los Angeles with hopes of expanding the brand and opening in more locations. I, for one, consider us extremely lucky!
Posted by Unknown at 4:34 PM No comments: