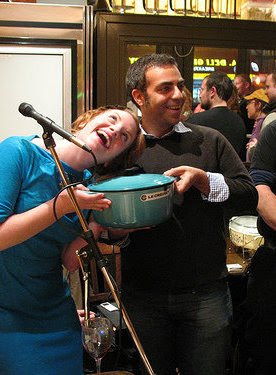 Brooklyn is home to many, but there's only one King of Casseroles, and his name is Theodore Peck. On Monday evening in a heated competition, Peck took first place among 28 other casserole contestants in the fourth annual matchup of culinary grit.

EQ caught up with his highness to learn of the savory taste of victory -- and get the winning recipe for Peck's cauliflower, purple potato and bacon casserole.

EQ: When you heard the word "casserole" what was the first thing that popped into your mind?

EQ: Was there any kind of cuisine or school of cooking in your approach to the casserole?

Ted: Seasonal, as you can imagine someone coming from the school of Dan Barber. I thought to myself, if Dan Barber made a casserole this is what it would be like. There's a different way of thinking about it when you are in a professional kitchen. So then I considered what I've been seeing at the farmer's maket. I've been eating a lot of cauliflower lately -- really digging it -- so I thought: This is it.

EQ: Were there any childhood casserole memories that inspired you?

Ted: What a charming question. I think a lot of people from the mid-west might have that, but I'm from New York, so no. The closest childhood memory I have to a casserole is potato dauphinois (said with tongue firmly in cheek and a French accent). It's sad, but it's actually true.

EQ: What was your reaction when you heard your name called out as the winner?

Ted: I never won anything in my life except for this contest. I think I almost went into cardiac arrest.

EQ: If you were invited to contend in the Iron Chef "casserole" battle, which Iron Chef would you challenge and how do you think you'd fare against him/her?

Ted: If I had to go into a Battle Royale, I think I could kick Bobby Flay's ass. Because I think Bobby Flay would make some mayonnaise-y chipotle casserole. Tostada, cumin, queso fresco -- it would be so easy to predict exactly what he would make. Basically, I think he'd be a dead man. He should just stay at home.

EQ: What's next for the Casserole King of Brooklyn?

Ted: You gotta take it one casserole at a time. But I will tell you this much: I see many culinary competitions out there in the future. I will happily enter into the Fondue Slam -- actually, Fondue Take-down -- in two weeks. 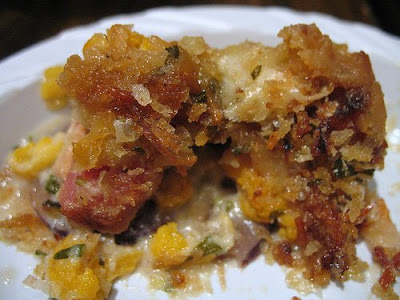 Pre-heat oven to 350 and butter your Pyrex dish. Cut Cauliflower into small florets, trimmed of stems and place in large bowl. Take ½ Cup of garlic and slice lengthwise in half.
Place a generous cup of olive oil in a pan with the sliced garlic and heat over a low to medium-low heat until the garlic starts to brown (15 – 20 min).
With slotted spoon, remove garlic from oil (reserve the oil for use in topping) and place in the bowl with Cauliflower along with a couple of tablespoons of garlic oil, splashes of olive oil, kosher salt and pepper, toss, and let sit while you do some other stuff.

Slice the potatoes on a mandolin, not too thin, toss with oil and salt and scallop layer the bottom of your dish. Place in the oven till the potatoes are slightly crisp and brown on top.
Then place the cauliflower in a single layer on a sheet tray, use two if necessary, and roast in the oven until there is some browning, and some moisture has evaporated.

To make the garlic cream: Place two cups of garlic cloves in a pot and cover in cold water and bring up to a simmer. Strain the garlic, return it to the pot and cover again in cold water bring to simmer and strain. Strain the garlic, return it to the pot, add the milk, apple, thyme, nutmeg, salt & pepper and bring to a simmer. Let it cool, remove the thyme sprig, and place the rest into a blender along with honey and butter, make a puree…

For the recipe that never ends: Now for the topping. Heat a pan and add 3 T garlic oil, two cups panko crumbs, 1T parsley, and salt. Toss and heat until toasted. Place in a bowl with the fried onions. Heat the pan again add 3T garlic oil, the phyllo, parsley, salt and toss until toasted. Place into the bowl. When the bowl cools, add ½ cup parmesean and toss. Press onto the casserole.

Bake at 350 until crust browns and there is some bubblin’.
Posted by Unknown at 1:28 PM 3 comments: 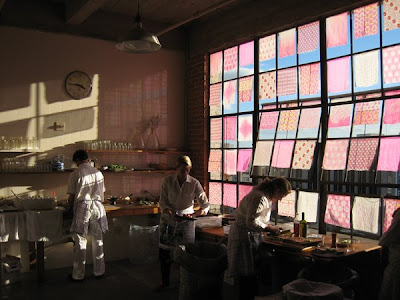 At the intersection of food and fashion this weekend were creations celebrating the local and artisinal alike. Housed in the airy loft space of fashion and housewares label, Dosa, artist/designer Christina Kim co-hosted an afternoon event with chef Alice Waters to benefit the Chez Panisse Foundation's Edible Schoolyard project.

Dosa showcased its discounted fall/winter "Casa Malatesta Franzini" traveler collection -- inspired by Kim's recent journeys and interaction with far-flung traditional cultures and craftsmanship -- while Waters held court and catered the party, bringing her trademark sustainable, local, and organic cuisine to a captive audience of Angelenos. It was a simple but visually stunning marriage of parallel approaches and philosophies to Waters and Kim's respective arts. 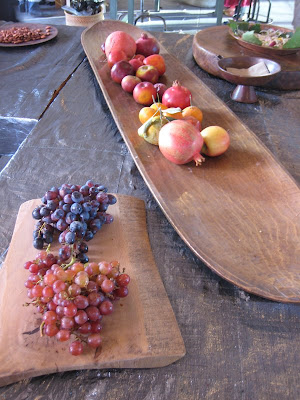 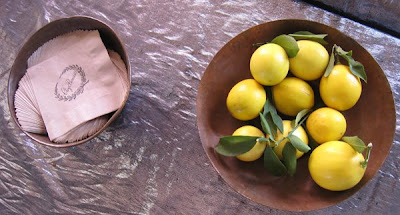 A small staff from Chez Panisse crafted an autumnal bounty gathered from local farmers' markets here on Saturday in Santa Monica and on Sunday in Hollywood. They staged a delectable still life of persimmons, pomegranates, apples, almonds, grapes, plums, and meyer lemons, plus a plate of fresh-pickled veggies including fennel, carrots, and radishes.

Chez Panisse servers emerged from the open kitchen with platters of rich farmer-fresh egg salad sandwiches, tangy watercress and cucumber sandwiches, and savory flat-pressed paninis with prosciutto, arugula and a fresh mozzarella made by a local gentleman who attended the event. A cleansing mint tea was offered to soothe and wash down the small bites. 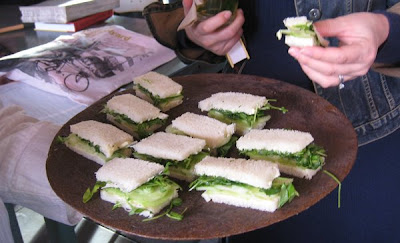 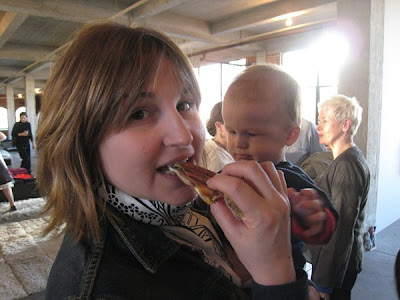 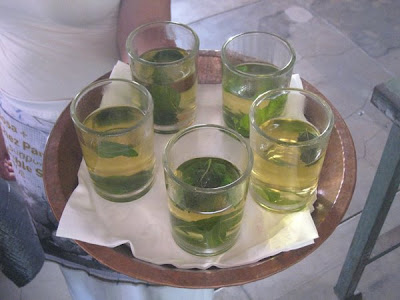 The only imports on the menu were the roasted almonds from Chez Panisse's local provider in Berkeley, CA, reported the restaurant's general manager Jennifer Sherman, and the spectacular Fleur de la Terre cheese from Traders Point Creamery in Zionsville, IN. Sherman lauded the Mid-Western diary's sustainable practices and 100% organic milk from grass-fed cows (no grain whatsoever), which produces a heavenly raw-milk, natural rind cheese.

For the eco-minded and taste-conscious, the event was not to be missed. Not to mention a chance to chat with the affable revolutionary and inspiration to many market-to-table cooks, chef Alice Waters. 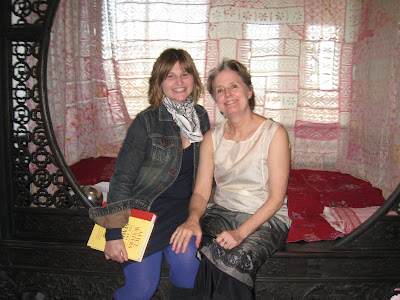 - by Jennifer Eno
Posted by Unknown at 5:31 PM No comments:

Since nervously gnawing on our fingernails could only get us so far, I decided to whip up some election night hors d'oeuvres for our viewing party. Working with only what was already on-hand, I drummed up a spontaneous stuffed mushroom concoction. The results were well received and seem worth noting, so here goes:

+ RECIPE
"Yes We Can" Stuffed Mushrooms With Scallops

Clean the mushrooms with a damp paper towel and trim the stems and cap area so it's primed for stuffing. Place mushroom caps in a glass Pyrex dish and drizzle with Canola oil, toss until they are lightly coated. Place in broiler to pre-cook for 5-7 minutes, just until they start to release a little liquid. Remove from broiler.

In a wok or skillet over medium heat, place 2 tablespoons of Canola oil and a pinch of red pepper flakes. Wait for oil to heat up and red chili flakes to begin to infuse the oil, then add ginger, garlic, scallions, gently stirring constantly with spatula for 1-2 minutes. Add diced scallops and continue to cook, gently stirring constantly until they start to turn opaque, 1-2 minutes. Then add spinach, cook stirring for 1 minute. Add Mirin wine and dash of soy, increase heat a little to cook wine off quickly until a loose reduced sauce remains, 3 minutes. Remove from heat.

Use a teaspoon to place scallop stuffing mixture into partially cooked mushroom caps -- put enough so the cap is heaping with the stuffing. At this point you could sprinkle the top with Panko breadcrumbs, but I didn't have any.