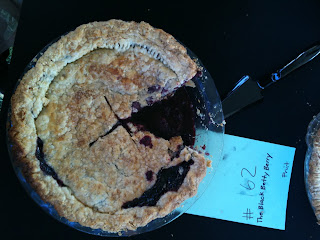 Our favorite Runaway Mormon Girl Elizabeth Lovins introduced two new lookers at the KCRW "Good Food" Pie Contest Sunday at LACMA — The Black Betty Berry and The Saucy Suzy Chick. As a returning 2010 finalist in the Cream pie category (Coco Chanel Coconut Cream Pie), Lovins' venture into the crowded Fruit category and the Savory gamut required months of study and strategic consultation with the best of local purveyors to fill her pies with distinction. In fact, it took the village of Los Feliz to turn out these two special pies.

Lovins loves her morning Gibraltar coffee and baking banter with pastry goddess Katherine Anne at the Deli at Little Dom's. Here she learns the key to the tender, flaky crust she so desires after test rounds of recipes by Thomas Keller, Nigella Lawson, and Alice Waters -- 25% lard and 75% butter. But not just any butter. It had to be Beurremont or nothing, which she finally stumbles upon across the street at McCalls.

When Lovins tells proprietor Nathan McCall that she's interested in a blackberry pie, he steers her to the Padwill Farms stand at local farmers markets, swearing upon their sweetness. To enhance the berries and deepen the flavor, she visits our Barnsdall-Friday-night-heavy-pour pals at Silver Lake Wine for a cabernet sauvignon recommendation (Cannonball) to macerate the berries in, along with lime zest, lime juice, Nielsen-Massey vanilla paste, sugar and freshly powdered ginger from the Spice Station on Sunset.

The Spice Station also provides the tapioca pearls that Lovins experiments with as a thickening agent. The tapioca starch proves to be fatally soupy while the tapioca pearls leave gelatinous gobs throughout the pie. None of this will do. Corn starch might result in a thick, cloying filling, so she decides to go with instant tapioca for the competition. The pie needs 6 hours to cool down and set up after baking, so she begins the Black Betty Berry process at 3 am on Sunday as the pies need to be delivered between 11am - 1pm that day.

The transition from an auspicious Saturday evening of art openings in Chinatown to late night pie workhorse is smoothed by a midnight-hour cup of coffee with friends and side of mashed potatoes at the Brite Spot. 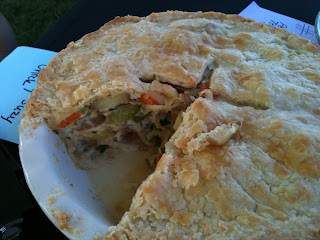 At the same time, Lovins begins the stock for her chicken pot pie. The Saucy Suzy Chick is based on Thomas Keller's chicken pot pie recipe in the Ad Hoc cookbook. Again, Nathan McCall provides the chicken source and code for the stock — chicken carcass (cook 40-50 minutes), then add the breasts (cook 15-20 minutes more), then two legs (another 15-20 minutes). He also recommends a saucy modification on TK's bechamel in the pie -- substitute 1 of the cups of milk with chicken broth.

By 8 am the blackberry pie is cooling and now it's time to make the chicken pot pie. Enter yours truly to provide sous-chef support and coffee. The mandolined potatoes and carrots have been parboiled separately in TK's court boullion, celery blanched in salted water and sitting in ice bath, white and dark meat cooked and cooling, so I start on the pearl onions around 9:30 am using TK's method. Cut to 10:30 am when I've now managed to peel and parboil the pear onions per TK. Lovins tends to the bechamel, which is taking forever to thicken. This pie needs about 1 hour to bake and we've got a lot to assemble before we get into the oven.

Once the bechamel is complete, Lovins rolls the dough for the crust while I gingerly (with care not spice) combine the seasoned sauce with the veggies and then with the chicken and then combine those two. By the time we egg wash the bottom crust to seal it from sogginess, put in the filling, get the crust on top and finally pop the potpie into the oven, it's 11:30 am. This leave us one hour on the nose for baking and then speed to LACMA like lunatics to get the pies there by the 1 pm entry cut-off time.

We realize there is a flaw in this plan -- the contest entry states no "hot" pies will be accepted. We're gonna have one steaming mother on our hands. Enter Brett Cody. We task him to make a pie transporter with a built in cooling-system. No problem! He locates a milk crate, fits cardboard on the bottom and lays ice packs from the mini-cooler along the bottom. He then places the wire cooling rack on top of that and zip-ties it to the crate to stabilize it. A kitchen towel goes on top of that so the pie dish won't slide around. Voila!

It's now clear this is going to have to be a pie shuttle situation. The first shuttle leaves with The Black Betty at 12:25 pm while The Saucy Suzy Chick follows behind in Car Number 2 at 12:35 pm. We each race down 6th Street at top-speed and get there with minutes to spare. Saucy Suzy is pretty hot still but there's a long line that gives us 30 minutes more of cooling time -- directly on top of the ice packs. 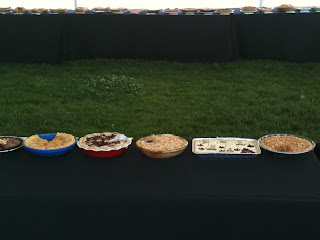 The competition is fierce this year as the number of entrants and pies seem to have tripled from 2010. In the end, Evan Kleiman does not call out "Lizzie," Betty or Suzy's name, but with all the new learning, local expertise and friends behind her there's no question that Elizabeth Lovins is winning.

Spring Pea and Ricotta Torte with Lemon and Mint via Food52.com

Appropriately green and delicious. Bookmarking this for a spring weekend or even a dish for the Easter holiday dinner.