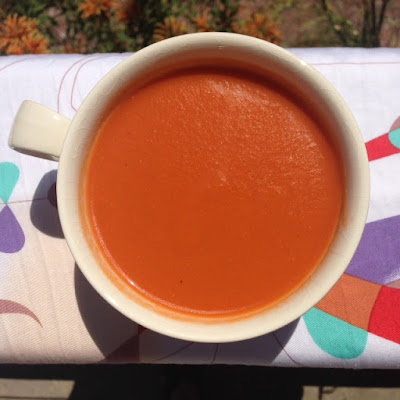 A perfectly executed gazpacho is where Summertime's best bounty comes together in its starkest splendor. The ripest tomatoes, freshest cucumbers, most piquant peppers, sweetest onions when combined well and at the correct ratios can be a revelation.

Too often I've made gazpachos that lean too much toward the salsa-y or marinara-y or bland-y. It's made me abandon the pursuit for years at a time.

But when it happens just right you get ... velvet, an otherworldly orange pink sheen and a dynamite taste profile that bursts and bursts. That first sip of the tomato elixir is a heart breaker -- a life taker -- as any respectable '90s pop song will tell you.

Last week the NYTimes printed the definitive gazpacho recipe. In case you missed it, it really rocks.

One of the things I appreciate the most about it is the use of the unsung cubanelle pepper. Easily one of my favorites at the summer farmer's market, the elegant cubanelle has the perfect amount of heat that pretty much anyone can tolerate. I should also note that choice of quality olive oil and sherry vinegar goes a long way in this recipe.

Step 1 Combine tomatoes, pepper, cucumber, onion and garlic in a blender or, if using a hand blender, in a deep bowl. (If necessary, work in batches.) Blend at high speed until very smooth, at least 2 minutes, pausing occasionally to scrape down the sides with a rubber spatula.

Step 2 With the motor running, add the vinegar and 2 teaspoons salt. Slowly drizzle in the olive oil. The mixture will turn bright orange or dark pink and become smooth and emulsified, like a salad dressing. If it still seems watery, drizzle in more olive oil until texture is creamy.

Step 3 Strain the mixture through a strainer or a food mill, pushing all the liquid through with a spatula or the back of a ladle. Discard the solids. Transfer to a large pitcher (preferably glass) and chill until very cold, at least 6 hours or overnight.

Step 4 Before serving, adjust the seasonings with salt and vinegar. If soup is very thick, stir in a few tablespoons ice water. Serve in glasses, over ice if desired. A few drops of olive oil on top are a nice touch.

Posted by Unknown at 8:27 PM No comments: 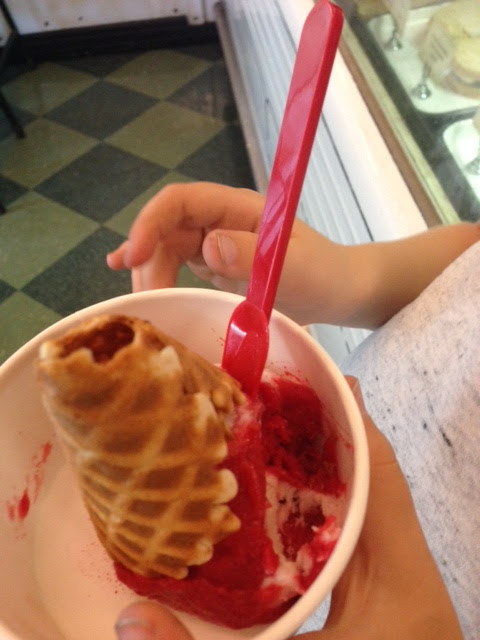 Our neighborhood happens to be saturated with a host of walkable ice cream, gelato and frozen yogurt options. This is not the worst problem to have. The strident newcomer, Jeni's Ice Cream, recently brought top-dollar haute artisanal ice cream flavors -- $28 for 2 adults, 2 kids to lap up Ndali Estate Vanilla Bean, Wildberry Lavendar, Brown Butter Almond Brittle and a sundae -- along with snaking lines around the block at all hours of the day. Sure, it tasted great, but the overhead involved in the experience ruled it out as a high-frequency option for us.

Upon witnessing Jeni's auspicious launch, we shuddered to think how the other local establishments might fare against such stalwart artistry in a hipster hood, but so far each shop seems to be different enough to hold its own. Froyo Life wins huge with the family sect offering a large selection of frequently updated flavors, toppings, ample space/seating & free toys/board games to occupy the ankle biters while adults peruse their large selection of current magazines. Gelato Bar is a well turned-out traditional Italian gelateria experience with classic flavors as well as sorbetto and a few frozen Greek yogurt options.

Then the high-drama began. After such gleaming fanfare, Jeni's was suddenly shuttered for weeks with no notice save for a handwritten sign posted by a neighbor urging the business to fess up to having a product riddled with Listeria that risked the health of the 'hood. It reopened and the long lines reappeared, but only for a short time before they closed again. This second Listeria outbreak scare was widely reported and even made the national news. Now it was very easy not to crave the high-priced, not-worth-the-wait dessert.

Cut to last weekend at the Barnsdall Art Park Friday Night free-for-all (not) when I succumbed to the child pleading for an ice cream from the Jeni's Ice Cream food truck. Here I stood, only 3 people deep in the line, but still flashing back to the pre-Listeria days and excrutiating wait times. When I finally arrive at the window, I've already accepted the $5.50 cost for a child's 2-scoop ice cream, but am now greeted with a new offense: the $1.00 extra charge to have your ice cream put on a cone.

Where does Jeni get the balls to charge an extra dollar so your kid can have an ice cream cone?! $6.50?? Retreating with ice cream bowl in fist-clenched hand, I swore, Never again, Jeni.

How I longed for simpler times and the reasonable yet delicious suburban ice cream stand of my youth.

Then today, when and where I was least expecting it, I happened upon the answer to my local ice cream angst. A frozen gem a mere 3 blocks north of all this fierce competition: Little Dom's Deli. Although a limited flavor selection, Little Dom's Deli has gelato and frozen yogurt for $3.00 and comes with a cone. But not just any out-of-the-package cone -- our esteemed local pastry chef at Lil' Dom's, Katherine Anne, handmakes small-batch fresh waffle cones on a pizzelle griddle. All I can say is thank you ... and Little Dom's Deli wins!

Here's a recipe from Saveur.com to make your own waffle cones on a nifty pizzelle griddle at home:

Using an electric hand mixer, beat sugar and eggs in a bowl until pale yellow and thick, about 4 minutes. In a separate bowl, whisk together flour, baking powder, and salt. Stir in 3 tbsp. milk, the lemon zest, almond extract, and vanilla seeds.

Gently fold in flour mixture until just incorporated, followed by the remaining milk and 7 tbsp. melted butter. Let batter rest at room temperature for 15 minutes. Heat a pizzelle iron. Working in batches, brush iron with some of the remaining butter and add 1 heaping tbsp. batter to each mold. Close cover; cook until wafers are golden, 1 - 1-1⁄2 minutes. Wrap each wafer into a cone shape and let harden on a baking sheet, seam side down. Serve immediately, or store in an air-tight container for 1-2 days.

Posted by Unknown at 5:50 PM No comments: