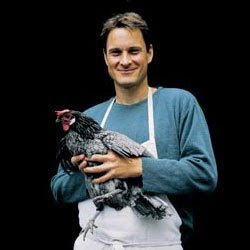 My latest guilty TV pleasure is New Scandinavian Cooking on local SoCal PBS affiliate KLCS. In episodes titled "Food Where the Lilacs Bloom," "Seabed Soil," and "The Lure of the Mountain," Danish chef Claus Meyer transports us to Denmark on his local ingredient purveying adventures. He plucks just-ripe fruit off treetops and grabs still-slithering eels out of a fishmongers' net with his big bare hands boatside from his sea kayak. It is, in a word, awesome.

Chef Claus is passionate and brutal in his delivery when telling his audience how to cook something -- especially when talking about "apple must" or commanding us to "Skin," "Scrub" or "Slice." His stripped down recipes simply instruct: "This is how you do it...." For me, the novelty of his approach is endlessly entertaining.

Once he seeks out the necessary ingredients, Claus wastes no time and immediately assembles an IKEA-esque cooking station on location -- be it on the seashore among the craggy rocks or in the midst of an orchard, marshlands or open meadow -- and begins to prepare his meal. It's like the "man in the wild" of Werner Herzog's Grizzly Man meets the stark storytelling (and production values) found in a Lars Von Trier Dogme film. At the same, New Scandinavian Cooking leaves me reeling from peals of laughter over Chef Claus' uber dry cooking-related jokes. Chef Claus is truly a breath of fresh air from the rampant Rachel Ray-ification of cooking shows.

+ Shrimp Sandwiches with Mayonnaise and Dill

+ Halibut with Leeks in Caper Vinaigrette

+ Pot-roasted grouse served in its own sauce with mountain berries

+ Celery root baked in straw and clay on a campfire

+ Syllabub with marinated berries and raspberry liquor
Posted by Unknown at 11:09 PM 1 comment: