New Fish Taco on the Block 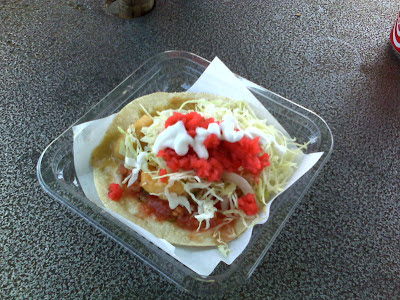 Fish tacos top the list of my favorite local SoCal eats. Cheap, filling, and super-tasty, what's not to love? So when a new addition to the Hillhurst Avenue food corridor in Los Feliz popped up claiming the name "The Best Fish Taco in Ensenada" -- I was so there.

For years, my go-to has been 7 Seas (7 Mares) on Sunset Boulevard in Silverlake, but lately their holy trinity of fish, batter and slaw struggles for the right balance. It's high time to try a new rendition.

Set back from the street on a corner lot, BFTIE isn't easy to spot. The signage and location is further obscured by swaying palapa fronds and random junkers in the parking lot they share with the body shop next door.

Upon entrance, the joint feels like a startup trying to work out the kinks in its spacious configuration. The menu above the counter offers three basic options: Fish Taco $1.50, Shrimp Taco $2.00, Drinks $1.00.

With such simplicity, you'd think this would be the quickest, easiest meal, this side of the golden arches. But not so! The Best Fish Taco in Ensenada has rules, thanks to Joseph, the owner/guru.

First off, to ensure the highest quality of your fish or shrimp taco, ordering multiple tacos is discouraged.

The idea: you're served up freshly cooked fish or shrimp plucked from the batter bowl, into the frying oil, and onto the white corn tortilla warming on the griddle. You walk over to the fixins bar for finely julienned cabbage slaw, cool crema, avocado sauce and your choice of salsas from mild pico de gallo, medium salsa roja to hot mango salsa. The radish relish is their secret weapon -- its tart, tangy zing brings new taco dimension.

It works. This way the integrity of each taco is in tact -- its crisp lightly battered seafood, firm tortilla, slaw and sauces meld into a winning combination. We learn BFTIE's fish of choice is Basa, a farm-raised freshwater whitefish that has a rich texture comparable to Chilean sea bass. Joseph, who worked in the commercial fish industry for years, clearly did his research.

Next, we witness two firemen walk in and order a slew of tacos to go.

"To go?" Joseph questioned, having none of it, "Fish tacos don't travel, man."

The firemen fall into line, having one taco at a time seated, and then returning to the counter to order the next one. Talk about an indicator of Joseph's level of fish taco seriousness -- not many have the nerve to deny the local firemen food to go. Hence, The Best Fish Taco in Ensenada lives up to its name.