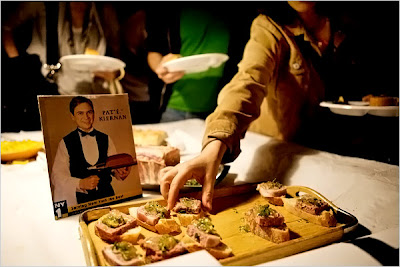 Cooking competitions are all the rage among New York's young and hyper-social culinary enthusiasts, as reported in today's "Dining In" section of the New York Times.

EQ takes special interest as we covered the cook-off competition circuit in November 2008, interviewing the then newly crowned "King of Casseroles" Chef Theo Peck. The article, "In New York, the Taste of Victory," profiles Peck as the "man to beat," having since acquired three more championship titles and consistently ranking in the Top Two of all cook-offs he has entered.

Peck is characterized as something of a comeback kid as these sweet culinary victories follow a crushing defeat earlier in the Fall when his plans to open his first restaurant in Fort Greene Brooklyn were crushed as his funds fell victim to Bernie Madoff's ponzi scheme. The Times reports:

Mr. Peck, 37, has spent most of his life around the restaurant business. His family owned Ratner’s, the venerable Lower East Side kosher dairy restaurant, where he often worked as a cashier. After college, he and a friend opened the Lansky Lounge in Ratner’s back room, briefly the hottest bar in the newly gentrified neighborhood. He ended up at the New England Culinary Institute and cooked at Blue Hill at Stone Barns and at Hugo’s in Portland, Me.

He returned to New York last year, planning to open his own restaurant in Fort Greene, Brooklyn. He acquired partners and was ready to put up his own money — money he had saved and invested. Unfortunately, he said, it was invested with Bernard Madoff.

Killing time online, he discovered the local competition scene. His girlfriend nudged him to participate.

“She said, ‘Why don’t you just go and do this casserole contest and get your mind off it? You’ll get yourself back in the game a little.’ ”

So Mr. Peck showed up at the Fourth Annual Casserole Party — held last November in a Greenpoint bar — bearing a casserole he had prepared in his Stuyvesant Town apartment. It featured roasted orange cauliflower and thinly sliced purple potatoes, mixed with apples and bacon. He had bound the vegetables with garlic-infused cream and Gruyère, and covered the top with fried onions and crisp shredded phyllo sheets. It took first prize. 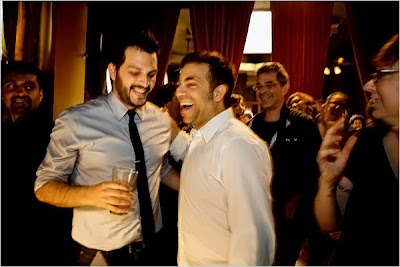 Having known Theo for many years, EQ is thrilled to see him in the spotlight. His passion and commitment to cuisine is in his blood. He is a gifted and visionary chef with a very bright future (not to mention highly personable, hilarious, exceptionally telegenic, and primed for a book deal).

Follow Chef Theo Peck on his food blog, Carnivore Hearts Herbivore. And if you're in NYC, don't miss Chef Peck's latest creations at the First Annual Brooklyn Beer Experiment -- a cook-off featuring dishes made with beer, as well as home brewing competition -- on June 7 at the Bell House.
Posted by Unknown at 1:28 PM