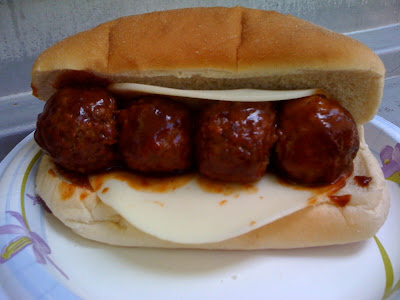 There's nothing worse than showing up late to a barbecue because of a conference call that went too long, and having only scraps remain. (And missing the raucously fun live honky-tonk pop band to boot.)

Being such a lover of good 'cue, I was ready to hunker down and salvage the last savory bits of pork and potato salad. Luckily, Camille was there to save me from myself and point me in the right direction: Smokin' Willie's BBQ truck was parked just a few steps away down the patio ramp. Enter ray of hope!

The LA food truck sensation has been widely reported by my fellow food bloggers, and with all the local varieties out there we've nearly reached critical mass. So I guess I'm a little late to this party as well. Though I must admit, the Great Hot Dog Letdown of 2008 at the much-lauded Let's Be Frank truck in Culver City left a bit of a bad taste in my mouth for "gourmet" mobile meals.

As I approached the truck, I saw a frenetic Willie drenched in sweat and working overtime to serve the lunch rush. People were no longer ordering, Willie was just maniacally tossing tacos, sliders, and sandwiches out his window. He gave me one look and shouted, "OK, she's gotta get my killer one!!" 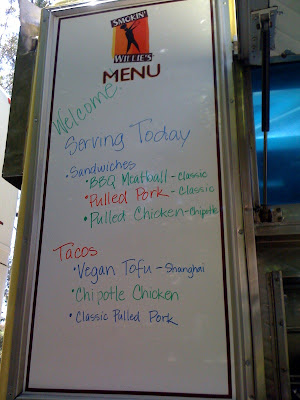 What arrived was a no-frills BBQ Meatball Sandwich on a bun with two slices of mozzarella cheese. I appreciated that Willie's meatballs came lightly dressed in his signature tangy barbecue sauce and that the cheese wasn't melted. It was just the right balance for a hot day -- nothing too sticky, sloppy or unwieldy, and the flavors presented themselves in a bright clean way. The meatballs were dense and succulent, as one would hope.

Next up was a Pulled Chiptole Chicken Slider. The first bite had very surprising zingy citrus palate and made me realize what an over-chipotletized world we live in. Well done, Willie -- you've mastered that fine line between flavorful and flavor-overload.
Posted by Unknown at 1:25 PM